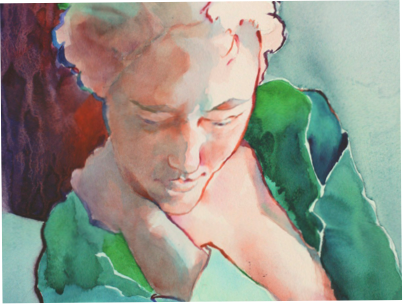 Those of you who have known me for a while know that I’ve been working hard to take that next big step in my art development. I felt like every painting I finished, no matter what the subject or approach, was just like the last one I had done. I both wanted and needed something more.

I started with Steve Quiller, who told me to draw less on the paper and paint more from my gut, to paint shapes instead of things. Easier said than done, it turned out.  I pushed and sweated and swore.

Eventually, I took Mike Bailey’s “Watercolor - Beyond the Obvious”, which got me turned in the right direction. I finally started thinking in shapes for the first time. What a rush!

Now I am taking a “Master Painters” class from Mary Moquin, an artist here on Cape Cod whose work really speaks to me. The entire class is aimed at helping each artist find their own “voice”, which was exactly what I was looking for. It took some fast talking since she doesn’t work in watercolors, but I’m in.

Two classes later after what feels like years of banging my head against the giant step I’ve been stretching on tiptoe for, I have finally gotten myself over the lip of that next level that seemed so high and out of reach.  I am trying things I never even thought about trying before, and seeing things differently.

“Prism” is an example. I’m almost done with a calla piece that flowed out of my hand and heart so quickly that I still can’t quite believe it. I am excited as I haven’t been in years, so I have to get back into the studio, but I will keep you posted.