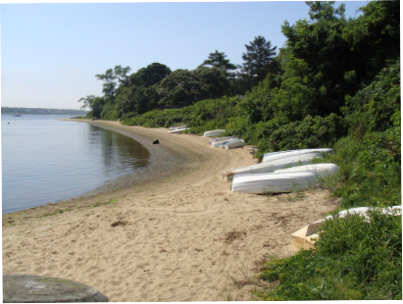 It's amazing how quickly life can return to normal. It almost feels like there wasn't a huge storm last weekend. It also implies our life here has developed a "normal" mode again. I like that.

Cape Cod in the summer is inundated with visitors, so much so that the road system is really strained. High season only lasts for two months, though, so the roads are left unwidened, and stoplights are few and far between, at least on this part of the Cape. Of course, if they did "improve" the streets, even more tourists would come, and everyday business would be hard to conduct. Hmm. Maybe there's a method to their madness, eh?

The interesting thing about driving during high season is that the tourists all stay on two or three main routes. Backups and clogged intersections are expected unless you use the back roads. Which are amazingly uncluttered, so travel times are swift.

So why don't the tourists use them? Because leaving the main drag is kind of like aiming your car into a giant maze. If you don't know the right turns by sight, you get lost.

To those of us born and raised in the west, that just doesn't compute. I know it didn't for me, not until we arrived. Remember that trees are everywhere. Thickly. One stand of trees looks a lot like another when they are flashing by. Also, there are things we take for granted that don't exist here. Like the grid system and street signs at every intersection. Oh, and hey, if Thomas B. Landers Road shows on the map as a major road, it will be a major road on the ground, right?

Wrong. The streets here weren't planned ahead. They started as horse paths that ran from someplace where people lived to, say, a blacksmith shop or from a part of town to a meeting house. Point A to Point B along the straightest path offering the least resistance. Corners can be very sharp (horses corner well), and intersections can be complex and correspondingly dangerous.

Some roads that show up on the map are no more than ruts I'm sure not taking my low-slung Prius into. I've seen better 4-wheel-drive trails in the Rockies at 10,000 feet. Other, more major roads often intersect with what the maps show as minor roads, yet on the ground, the "main" road deteriorates to minor status, and the "minor" road is wide and well-maintained.

At major intersections, you will find a street sign for the road you want. Remember it well, as you won't see another until the next major intersection. Apparently, the theory is that since you turned onto the road, you know which road you are on, hence there is no need to tell you again. This works fine so long as you made the right turn in the first place. Things kind of fall apart if you weren't sure.

The answer? Make sure you have plenty of time when you start out, buy a 3G iPad and fork over the dough for 3G coverage, maintain a sense of humor, and don't shriek at your companions in your car.

Or you can stick to the main roads. Your choice.